ASA Listing and getting fiat value on Algorand Wallet App

Me and my team are creating ASA for a big projet, the goal is to use it in real life.

We choose to use the Algorand Wallet on mobile, since it is fast and reliable. We have two big questions at the moment

2 - Which exchange do you recommend to list our ASA ? ( The price of the token should be reflected in the wallet with question 1 )

Thank you for your help

First of all, welcome to Algorand

I’ll let one of the Algorand Wallet experts here to answer your first question.

As for the second one, I’m pretty skeptical if you’ll find a good answer on this forum ( and not due to the lack of knowledge ); Most of the forum participants are affiliated in that way or another with Algorand, and as such would avoid giving you any concrete recommendation ( that includes myself ).

Thank you for your answer

Are there already any ASA assets that have been listed on any Exchange?

Hi @ynphea , I had this same exact question, but I’m still finding it difficult to clear up among other things. Did you manage to hear from an Algorand Wallet expert, as @tsachi mentioned you might? Seems like a useful app feature that would be great to have in a future update!

I’d also like to add my own questions, which I know are going to sound painfully basic to seasoned developers, but I’m working my way up so please bear with me

I’ve been able to create my first batch of ASAs using AlgoDesk with Algo from my AlgoSigner wallet, but other than the 0.404Algo fee I paid to create them, I don’t see how to set the value of my total supply of ASAs, or how to make them available for purchase (since the iOS Algorand Wallet app doesn’t have a purchase functionality).

Thanks @fabrice!
0. But can you tell me how to set the initial value of the supply at ASA creation? I don’t see on AlgoDesk anywhere in the visual controls (non-SDK) to set the amount of Algos (value) that will be used to create the total supply (total number) of assets. All I see is the flat fee which didn’t seem to change whether I created 1M supply or 0.1 supply of my ASA. For example, if I want to spend 100 Algos to create a 1M supply of an ASA, then shouldn’t I be able to see that each individual token in that series is worth 0.0001 Algo?
3. And from this example, let’s say all the assets in circulation are returned to the creator account after some period of time, and that after fees from transfer the current balance of the total ASA supply is equivalent to 99.2 Algo, does destroying the asset supply refund the 99.2 Algo (from the 100 Algo used to create it) to the creator’s wallet?

From the blockchain point of view, ASA have no value.

If you choose a fee of 100 Algos to create the ASA, the fee will go to the fee sink and be lost. It will say no thing about the value of the ASA and will never be reimbursed.

If you want to give an ASA a value, you need them listed on an exchange or have a smart contract selling/buying them for a given value. See e.g., Algorand Developer Portal

Now that makes more sense! Then if I could get one more point of clarification from you, any idea why the system charged me 0.404 Algo just to create my series of ASA? It was much higher than the usual tx fee of 0.001.

I thought maybe what you said about congestion might be the reason, which that’s still very high, but I just tried again now and the transaction fee is even higher at 0.478 Algos (I rejected the transaction and canceled the creation). 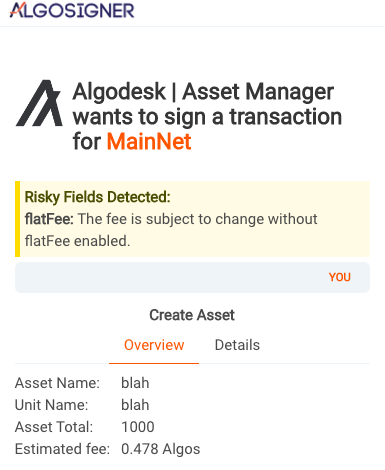 This is because of one minor issue on algodesk.io.
It is now fixed and deployed. now you will always have flat fee of 0.001 algo.